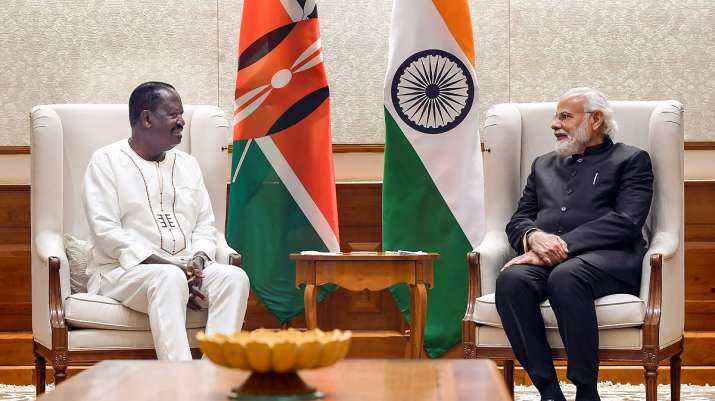 I wish to open a Branch of Sreedhareeyam at Kenya, Raila Odinga to PM Modi

Former Kenyan Prime Minister Raila Odinga, whose daughter regained her eyesight after undergoing treatment at Kerala’s Ayurvedic hospital, discussed with Prime Minister Narendra Modi the opening of a branch of the same hospital in Kenya to provide better treatment to his country’s people.
Odinga, who was in Kerala recently, thanked Sreedhareeyam Ayurvedic Eye Hospital and Research Centre in Kerala for restoring his daughter’s eyesight.
Odinga’s daughter Rosemary was diagnosed with a brain tumour in 2017. She had undergone surgery in Nairobi. But in the post-operative period, Rosemary complained of severe loss of eyesight.
“I have suggested to them that they should come and set up a branch in Nairobi, Kenya and I am going to work with them to set up this centre,” said Odinga.
Further, Odinga said that he even discussed this with Prime Minister Narendra Modi and told him the spectacular story. “I have told him that we would be happy to work together. This will be called South-South cooperation to bring this technology to Africa,” he said.

#WATCH | I came to India for my daughter’s eye treatment in Kochi, Kerala. After 3 weeks of treatment, there was a substantial improvement in her eyesight. It was a big surprise for my family that my daughter was able to regain her eyesight again: Former Kenya PM Raila Odinga pic.twitter.com/0yreS5Hsbt

Giving details of his visit to Kerala, the former Kenyan PM said: “I came to India for my daughter’s eye treatment in Kochi, Kerala. After three weeks of treatment, there was a substantial improvement in her eyesight. It was a big surprise for my family that our daughter could see almost everything.”
“By using these traditional medicines, she finally has her eyesight back and this gave us a lot of confidence. I have discussed with PM Modi to bring this treatment method (Ayurveda) to Africa and use our indigenous plants for therapeutics,” he added.
The Kenyan leader also said that treatment at hospitals in Kenya, South Africa, Germany, Israel and China did not help in any significant restoration of sight.
In 2019, Rosemary travelled to India and underwent treatment at Shreedhareeyam Ayurvedic Eye Hospital in Koothattukulam, Kerala. She felt that the Ayurvedic treatment that she received there was helping her.
Underlining that his daughter Rosemary had travelled to several countries seeking treatment, the former Kenya PM said, “We have been impressed by the restoration of our daughter’s eyesight after the treatment in Sreedhareeyam Ayurvedic Eye Hospital and Research Centre in Kerala and traditional medicines actually work.”
“My daughter got sick about 3 years ago. She had a haemorrhage as a result of which she was operated in Nairobi. In the process of that operation somehow they interfered with the optic nerve. She was treated in South Africa for 3 months but unfortunately, she was not able to recover eyesight. We sent her to Israel again but no improvement showed. Then she came back to Kenya. Then again we sent her to China where she had further surgery again. It didn’t help her in improving her sight. Then we sent her to Germany but that also was not successful,” said the Kenyan leader.
“When everyone was giving up, a friend of mine suggested an institution in India for Ayurvedic treatment where we could try. Then we decided to try it. We sent her to Kerala Sreedhareeyam Ayurvedic Eye Hospital and Research Centre at Koothattukulam in Kerala. In September 2019 she stayed there for 3 weeks. When they discharged her they said they she should continue medication,” he added.
Rosemary could see after wearing glasses. She was very excited that she has regained her sight. This was a pleasant surprise for my family, he said.
Further, Odinga said that Rosemary was supposed to come back for review in 2020. Unfortunately because of COVID, she could not travel for the last three years. She was waiting and now finally we are able to come and last Monday we arrived and they told us there is a big improvement in eyesight.
He noted that modern medicine has more or less surrendered that my daughter eyesight could not be restored but using these traditional medicines they have been able to restore her eyesight. Now she is able to go back to work and she is able to drive. It has given me a lot of confidence in indigenous medicine.