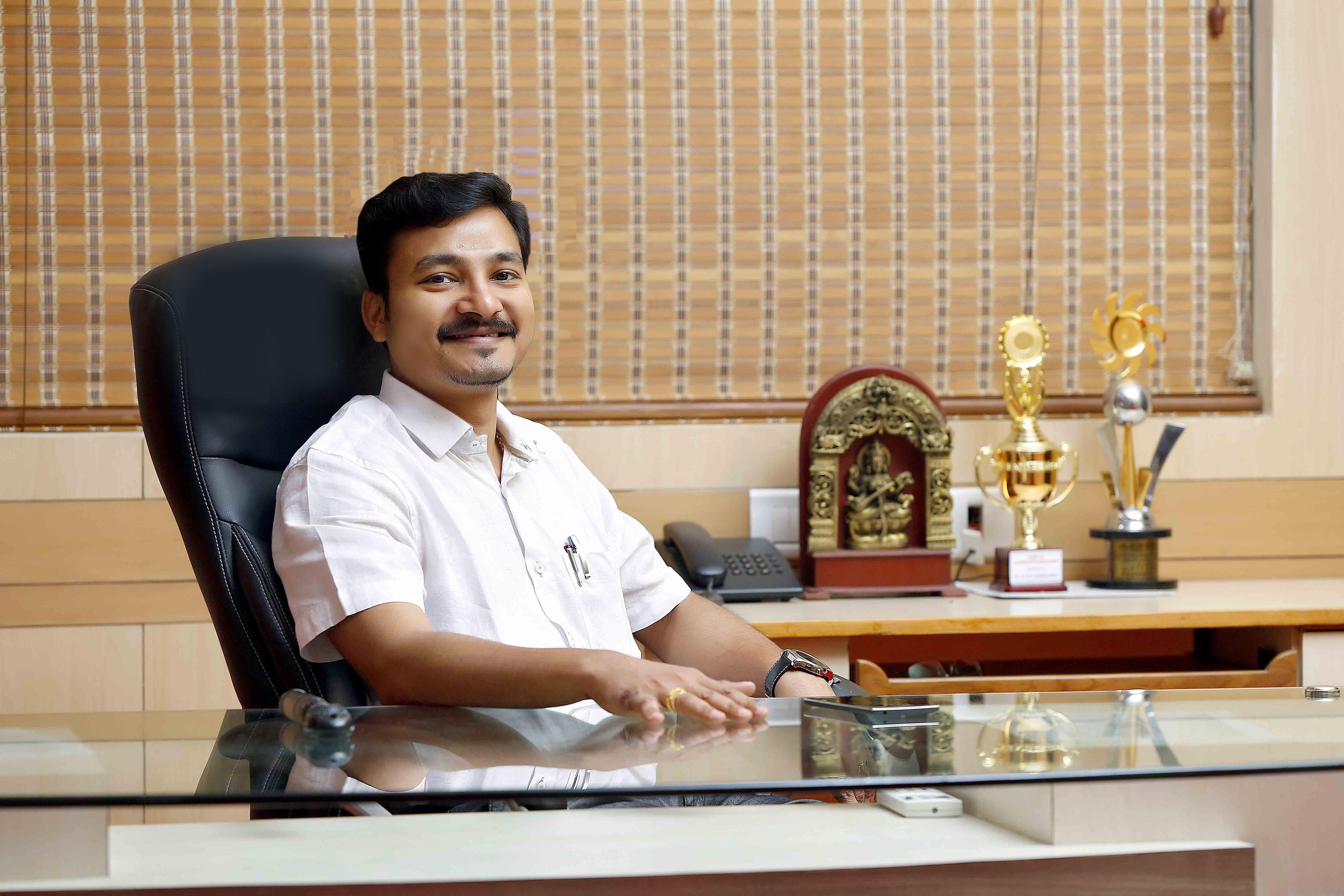 Diabetic retinopathy, also referred to as Diabetic eye disease is a clinical, progressive, degenerative, vision-threatening ophthalmological condition where the small blood vessels and neurons in retina get affected and finally the situation becomes so adverse that retina damages. Means, it has become one of the prominent or predominant reasons for making the life dark to people, by causing permanent blindness.

The reason for this devastating diabetic retinopathy, a part of diabetic neuropathy is, as the name itself speaks, a very simple condition, diabetes mellitus which is India’s and also the world’s fastest-growing disease especially 80% being contributed by the developing countries. Between 2012 and 2015, it has caused empathetically 1.5 to 5 million deaths per year. It affects the body’s intermediate metabolism, speeds up cardiovascular ageing and imbalances the insulin secretions.

In India, 72 million cases were recorded till 2017 backpacking 49% of the world’s diabetes and the number is expected to hit 134 million by 2025. As the medical statistics speak, diabetes not only doubles the risk of early death, also fades the color of life by ceasing the vision silently, causing Diabetic Retinopathy.

The risk to type 1diabetes patients is more than to that of type 2 cases. It breaks into the body as a lifestyle disorder, but damages the functioning of many of our organs, and here, specifically concerned, the Eye. The data speaks; the one maintaining high blood sugar levels for 20 long years is highly prone (in statistical terms 80%) to the condition of diabetic retinopathy. Fortunately, 90% of fresh cases could be reduced with proper treatment and management using clinical procedures. The commonly affected age group is between 20 and 64. The disease, in the initial stages, start with mild blurredness in vision and cranes up to the stage of blindness and the changes are rapid too, without any specific other symptomatic warnings.

There are two stages in the condition, diabetic retinopathy. The initial stage is silent symptom stage that records even full vision (20/20), is termed as Non-Proliferative Diabetic Retinopathy (NPDR). In this stage, the diagnosis is by fundus photography, where the microscopic blood-filled, bulges in artery walls can be monitored. In case of mild reduction in vision, fluorescein angiography, that infers about retinal ischemia, which means, the lack of blood flow. The stages of NPDR are mild, moderate and severe and the vision loss rate is also reported accordingly. The macular edema (a bulge in the macular region), which can be diagnosed by OCT (Optical Coherence Tomography), may happen at any stage of NPDR, and the vision disorders and image distortions may not be the same in two eyes.

The advanced/ second stage is Proliferative Diabetic Retinopathy (PDR), where the newly formed abnormal, fragile blood vessels at the hind part burst and bleed at any instant, causing the blurredness of vision. But in the Pre Proliferative Diabetic Retinopathy Stage, bleeding may not be severe and leaves a few floating parts in the focal area of the eye and may disappear in a very short time. Higher the leakage, greater the blurring of vision. There are large haemorrhages which happen more than once, especially during sleep, which eventually leads to blindness, if not treated properly. Funduscopic examination eases to identify cotton wool spots, flame haemorrhages and dot blot haemorrhages clearly.

The Ayurveda characterizes diabetes as a Prameha / Madhumeha Janya Timira. According to the traditional methods of timira vyadhi pariksha and also modern diagnostic tests, 20 to 25% of diabetes patients bear the risk of blindness. Studies specify that 34.6% of NPDR, 7% of PDR, 10.2% of Vision Threatening Diabetic Retinopathy and 6.8% of Diabetic Macular Edema cases have been recorded considering the overall diabetes patients across the globe. Ayurveda specifies, Avarana and Dhatu Kshaya, which are the causes of prolonged and uncontrollable hyperglycemia, pile up to the condition of Diabetic Retinopathy.

Agnimandya (Ama) plays a major role in the pathology of Diabetic Retinopathy along with the others like Urdhwaga Raktapitta, Ojas Kshaya, Raktavritta Vata and Pranavritta Vyana compel to effects of Diabetic Retinopathy. Tridoshas, Raktadosha, Sapta Dathu including 4 Drishti Patals will be affected because of this silent disease. To resolve the issues of Diabetic Retinopathy, the ama disorder has to be rectified, using reactive oxygen species generation, Polyol Pathway Activation and advanced Glycation with end product accumulation.

Hence come the treatment processes and management procedures for Diabetic Retinopathy which include two arbitrary systems of medicine, Allopathic science and Ayurveda, where Ayurveda is more successful to treat and manage Diabetic Retinopathy at all stages, fortunately in most of the cases, permanently too. It concerns not only the Roga but also the Rogi, very individually. The vaidyas are mastered to attain this supremacy of the case study. This is again a diversified aspect of the science of life, where a thorough clinical physical examination has been conducted and even understands the psychological condition of an individual before the implementation of exact treatment, by adhering themselves to strong medical ethics. It gives more importance to the observed symptoms than what the modern investigations speak.

The concept of a permanent cure, especially in the most challenging cases like the Diabetic Retinopathy is made possible by the oldest science because it believes in the principle of “Avoiding the Cause”. Which means, not only driving away from the disease symptoms and signs for that instant, a steadfast remedy can be guaranteed by Ayurveda. Its approach is bi-dimensional i.e., to control diabetes and also to treat Diabetic Retinopathy simultaneously. The treatment is very well possible, using internal and external therapeutic procedure, that is subtle and unique to each individual based on their own condition, unlike a common algorithmic one to all.

The supremacy of Ayurveda in treating and managing all the conditions and stages of Diabetic Retinopathy can be referred at a glance through the following analysis. 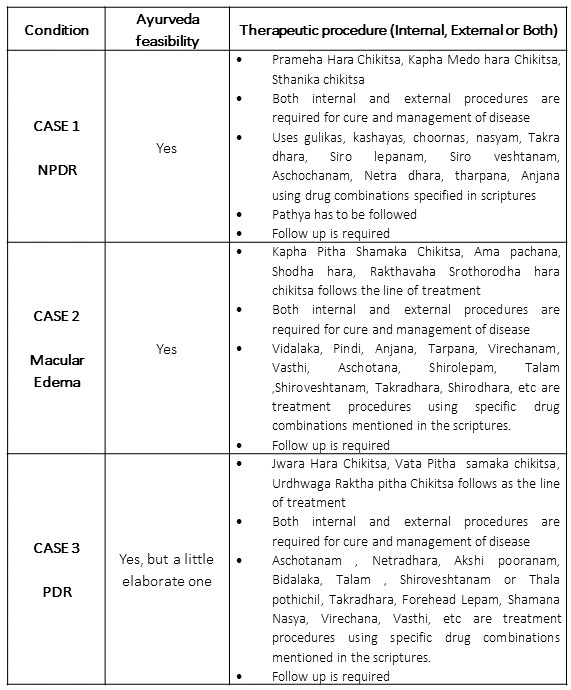 The results in Ayurveda at all stages are admirably satisfied and the success rate is remarkably high. So, Ayurveda, especially Shalakya Tantra is contributing excellently to its own statement, “Sarvendriyanam Nayanam Pradhaanam”.