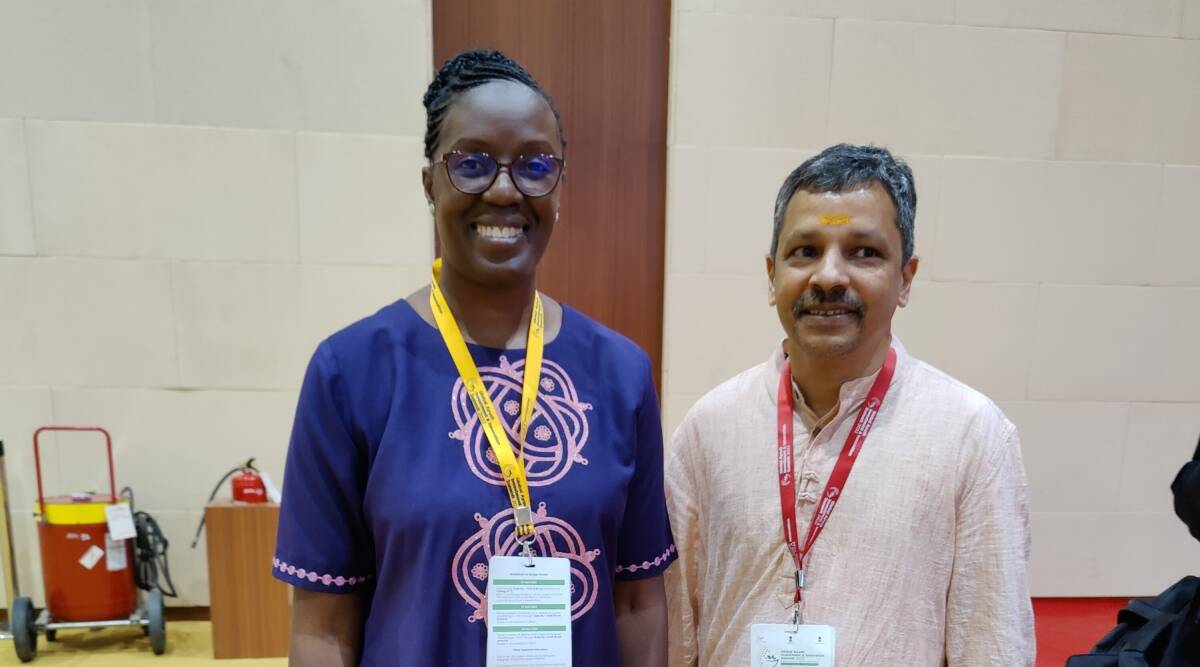 At AYUSH summit, PM Modi tells how Ayurveda helped ex-Kenyan PM’s daughter regain eyesight
“It has been a struggle since I lost my vision in 2017. I have been to China and other countries and undergone various treatment modalities like acupuncture. Nothing seemed to have helped,” says Rosemary Odinga, daughter of former Kenyan Prime Minister Raila Odinga.
“I just heard PM Modi call out my name and ask, ‘Rosemary, are you here?’ I said yes and stood up,” said Rosemary Odinga, the 44-year-old daughter of former Kenya Prime Minister Raila Odinga.
Prime Minister Narendra Modi on Wednesday narrated how, at a recent meeting, the former Kenyan PM told him about the trauma his daughter suffered when she lost her vision a few years ago. Underlining the growing global acceptance of traditional Indian medical systems, the prime minister added that Ayurvedic treatment in India helped restore Rosemary’s eyesight.
“You can imagine the shock and suffering that a person faces on losing his or her eyesight,” Modi told the audience after inaugurating the three-day Global AYUSH Innovations and Investment Summit in Gandhinagar.
He added, “As a father, Odinga searched high and low, went to various places, but the attempts were unsuccessful. Finally, he found some promise here in India. Recently, he met me. It was a Sunday and Odinga is my dear friend. He had become so emotional and spoke about their struggles after his daughter, post-surgery, lost her vision. After receiving treatment in India, she has regained her vision and her father told me that those were the golden moments when she could see.”
Bemused by all the attention on her at the event, Rosemary, who met Modi after his speech, told The Indian Express, “I did not understand what he was saying but am extremely excited to be here. This is my testimony of how a traditional system of medicine has helped people from other countries, and yes helped me regain my vision.”
Rosemary, accompanied by Kenya Medical Research Institute’s Chief Research Officer Dr FM Tolo, also ran into her doctor N Narayanan Namboothiri, the chief physician at the Sreedhareeyam Ayurvedic Eye Hospital and Research Centre in the town of Koothattukulam in Kerala’s Ernakulam district.
The 44-year-old, who works for a Cabinet secretary in Kenya but prefers to be identified as a snail farmer, lost her vision in 2017 after suffering a brain aneurysm that placed stress on her optic nerve. After trying treatments that did not work, she visited the hospital in Kerala two-and-a-half years ago.
“I am so happy. Before I regained my vision, I followed his voice and heard his instructions,” Rosemary said, referring to Dr Namboothiri. “I have now met him after a while. It had been a struggle since I lost my vision in 2017. I went to China and other countries and underwent various treatment modalities like acupuncture. Nothing seemed to help.”
Dr Narayanan told The Indian Express that Rosemary’s eyesight weakened considerably after the aneurysm because of optic nerve atrophy. “There was no clear visibility. To strengthen and rejuvenate her optic nerve, we took up pure Ayurvedic treatment. This included giving her traditional oral Ayurvedic medication and massages around the eyes. There were other procedures like taila dhara and others. She underwent two sessions that lasted three weeks — the first session was two-and-a-half years ago,” he added.
Rosemary continued with the medication during the pandemic and followed it up with more treatment sessions upon her return. Slowly, her vision returned. She said her treatment was still going on and there was room for improvement.
“My father met the PM and was full of praise for the traditional Ayurvedic system that has helped me. He also discussed bringing traditional medicines to Africa,” added Rosemary, who will speak at the summit about her experience.